Google is coming out with a new operating system they call Chrome OS. It’s new and shiny and I thought it would be fun to try out but don’t have the free cash the throw into buying a new device with it installed. (Not that there are any out at the moment.) Anyway, a month or so back I signed up for the Google Chrome OS Pilot Program. The program is designed to help Google find new guinea pigs to try Chrome OS and give Google feedback on how it works.

Well, I was home this afternoon because I had a screaming headache. After I woke up and feeling much better about the world, there came a knock at the door. The world’s greatest UPS guy left me my own shiny Cr-48 Chrome Notebook. I guess Google liked something about my application.

So, with hands itching to play with a new toy, I pulled this little guy out of the box. 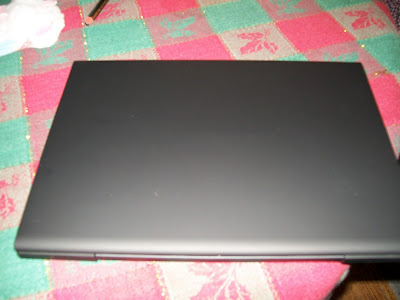 Unassuming chap isn’t he? Unfortunately, he was a non-functioning little guy. 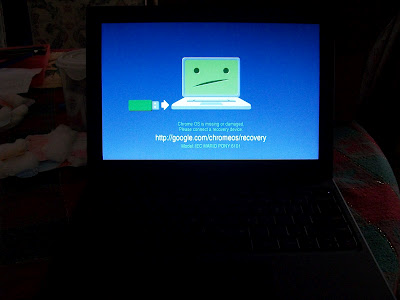 Man, what a buzz kill. Seriously, Google. If you want people to try out your new OS and actually write good things about it, it would help if it worked out of the box. Well, off to the recovery page to fix my new notebook.

The supplied shell script was taking forever to download the image. I copied the URL and used wget and it took ten minutes. There’s an interesting note on the recovery screen. “Your computer’s developer mode switch is in the ENABLED position. If this is unintentional, you should power off and toggle it back on after recovery is completed.”

Okay, so I followed the instructions and eventually reimaged the Cr-48’s disk. One reboot later and … it still failed. Frack. I reread the docs to make sure I didn’t miss a step and I ran into this page which describes what I was seeing. Apparently, Google sent me the machine in developer mode which allows one to install their own version of Chrome OS. Flipping the hidden switch out of developer mode fixed things so now it boots like it’s supposed to.

I ran through the initial setup wizard and logged in with my Google account. Up popped the Chrome web browser which downloaded all of my apps, extensions and bookmarks thanks to the sync feature of Chrome.

Unfortunately, I wasn’t able to do much more than that because the stupid piece of crap kept shutting down. It’s sort of behaving like it’s over heating but the machine doesn’t feel hot. I’ll keep playing with it but, so far, I’m supremely unimpressed.

A few more thoughts. The Cr-48 has a single mouse button like a Mac but allows you to double click by tapping with two fingers. Scrolling is done by dragging two fingers across the pad. It definitely takes some getting used to. You can actually click the track pad but it moves the pointer when you do it. Definitely funky.